Skinning is the process of creating an association between a Mesh (the Skin) and a Rig. More specifically in the Skinning process we define associations for each bone of the Rig’s Skeleton to each vertex of a mesh. In practice, for a polygonal mesh character, each bone is associated only with a subset of the character’s vertices.

Portions of the character’s skin can be influenced by 2 or more bones, where each vertex of the affected area gets an influence factor to each associated Bone. This factor is also called Vertex Weight. Thus the influence of each bone on a specific Vertex is defined by its Vertex Weight.

The process of Skinning includes:

Note: When binding a Mesh, then typically some form of automatic Skinning is applied as well to populate the mesh weight maps with initial data. Those initial weight maps are then optimized and tuned manually.

This is basically done in 2 Steps:

Before you Bind (Basic Preparations)

Cleaning up the Mesh

Make sure that the mesh does not have any implicit scale or rotation from one of its parent objects. This issue typically happens when your mesh is still parented to another object (Mesh, Rig, Empty,…) which has a scale and or rotation defined. Or when you have added scale and rotation to your Mesh Object(s) in Object mode.

If Avastar detects one of the above issues, it displays a warning message above the Bind to Armature button (in the Binding Panel).

When Avastar detects your mesh has negative scale values in Object mode then it also disables the binding button (button turns red). 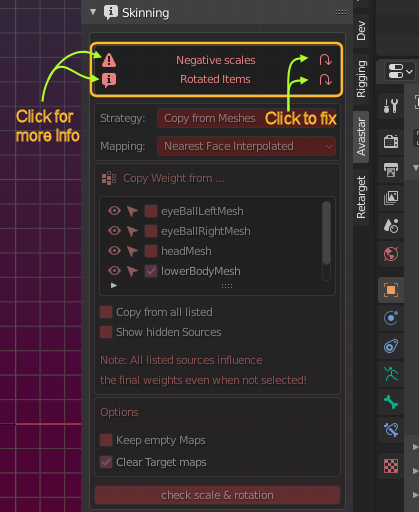 Click the fix button in the Skinning Tools (see image) or do it manually as follows:

This cleanup avoids unexpected behavior and it ensures that your object can be bound to another rig without distortions.

Tip: It is in general best to have as few objects as possible in your visible layer. So you best move all objects into another invisible layer which is not directly involved in the bind action. This ensures that you keep track of what happens.

Adjust the mesh to the Rig

Once you are happy with the alignment, proceed by selecting both the armature and the new mesh attachment as follows:

Now you have selected the Rig and all mesh attachments which shall be bound to the Armature. If you are familiar with Blender, then you might know about how to bind a mesh to an Armature. However please do not use Blender’s parenting option here. Always use Avastar’s Skinning panel instead.

Reason: Avastar adds some extra information when it binds a mesh to an Avastar armature to support the appearance sliders .

Next, Bind your Meshes to the Rig…

proceed to the Binding document