The Rig Display panel gives you full control over which parts of the Rig can be seen at a given time. By default only the Control bones are visible. But sometimes it is desirable to hide or unhide parts of the Rig.

Furthermore the control bones (green) use custom shapes by default. That is, they are formed as rings which are placed around the Avastar body. The benefit of the custom shapes is that they can be selected easier. But sometimes it is desired to switch from Custom shapes back to Blender’s default shapes (Sticks or Octahedrons). The Rig panel basically contains a collection of properties which also are available at other regions in Blender. But having them all in one place is a time saver. The panel is provided It has 4 major sections:

The first row of buttons changes the bone shape. You can select between the Octahedron Style and the Stick Style.

Note: In the Armature Data Panel (Properties Window) you have 3 more options for setting the Rig display style 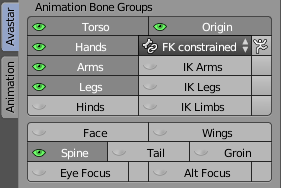 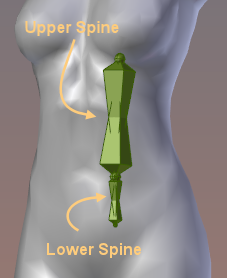 In the image aside the upper and the lower Spine bones (marked in Orange) have been unfolded. You see how they are embedded between the Pelvis, Torso and Chest.

Note: You can fold/unfold the spine from within the Riog Control panel 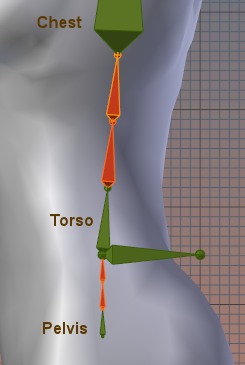