In this document we give a short introduction into how you can easily add physics to your Avatar using the Fitting Sliders.

This is an extreme demo of what you can make with the physics. The demo was made by SeraphLinden a couple of years ago

Avatar physic is directly attached to Collision Volume Bones in Secondlife. The bones of interest are: 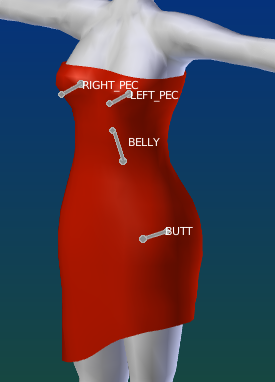 Some of the Collision Volumes have been added to simulate gravity (physics). This is implemented for Pecks, Belly and Butt. Furthermore LindenLabs have added some more extra bones for Fitted Mesh: UPPER_BACK, LOWER_BACK, LEFT_HANDLE and RIGHT_HANDLE. Avastar does not automatically create Weightmaps for these bones (Except for the BELLY). But we have added a weight generator for those bones.

This weight generator has unfortunately been named physics generator, although strictly spoken the Handles and the Back bones are no SL physic bones.

The weight generator gets into action when you click the Generate physics button.

After the physics weights have been generated, you get 4 new Fitting Sliders for Butt, Pecs, Back and Handles. You use those sliders to adjust the weights for the specific regions.

Hint: The sliders are split into 2 regions:

By default the Handles get no Weight (set to -1, see image) (as recommended by LindenLab ) 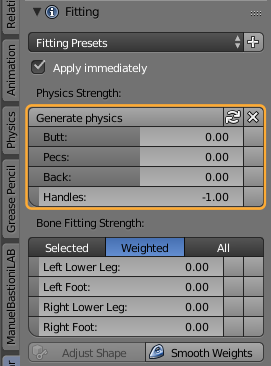 Important: Remember that only the PECK Bones, the Belly and the BUTT are influenced by Secondlife physics. All other bones are not affected.

I assume we begin with a mesh that has no weights on the collision Volume bones. When you select the mesh and open the Fitting Panel, then you should see the Button Generate Weights like in the image.

When you click on the button, then the initial weights are generated and the button is replaced by a list of bone sliders… 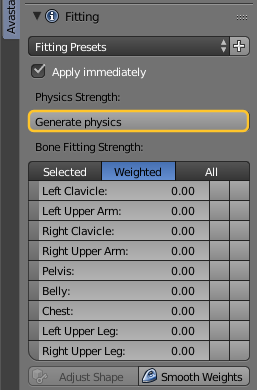 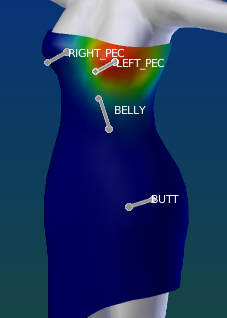 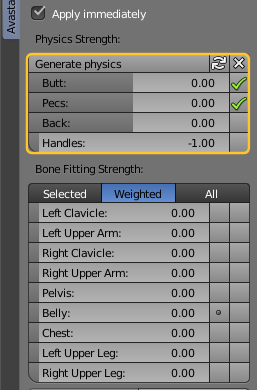 The sliders behave a bit in an unusual way: 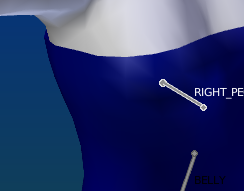 Slider on far left (no weights) 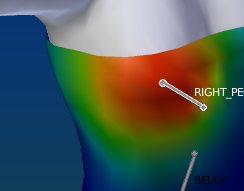 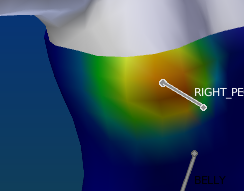