This is a short introduction mainly aimed at Developer kit creators who are not familiar with Blender and Avastar but want to prepare their Developer kit so that it can be used most efficiently from within Blender/Avastar.

Purpose of the Developer kit Manager

Developer kits basically are reference models of already existing (mostly but not restricted to human) Avatar creations. A Developer kit is typically used for creating additional content (attachments). Hence a Developer kit must ensure that whatever attachment is created with it can be attached easily to the original model in SL (or OpenSim).

Clicking on one of the listed items, a new character plus its Armature are created from the related Developer kit, ready made for direct usage with Avastar. 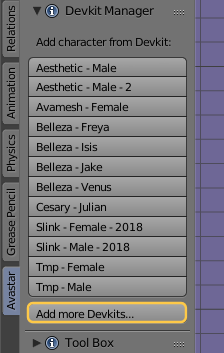 Very important: We do not distribute Developer kits together with Avastar. And we have no plans to do that at any time in the future. Any integration work is only done by the attachment creator. But we have made the integration of a new Developer kit a matter of a few clicks as i will show below

Adding an entry to the Developer kit Manager 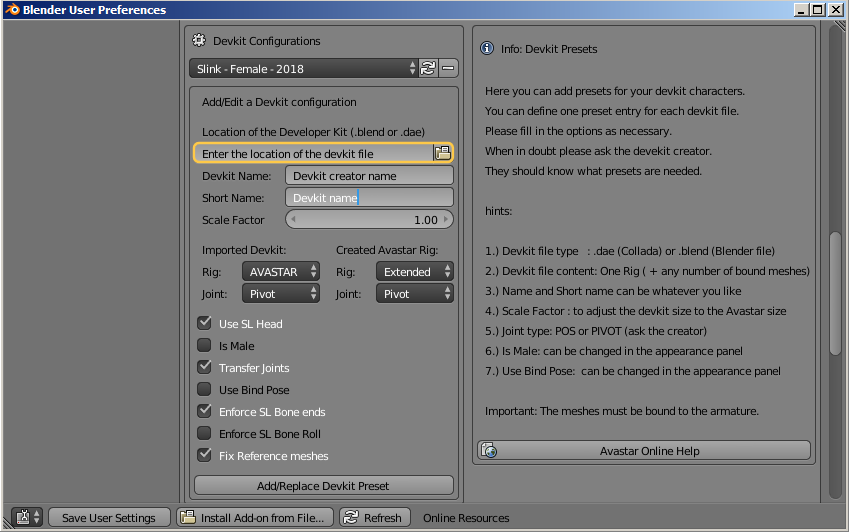 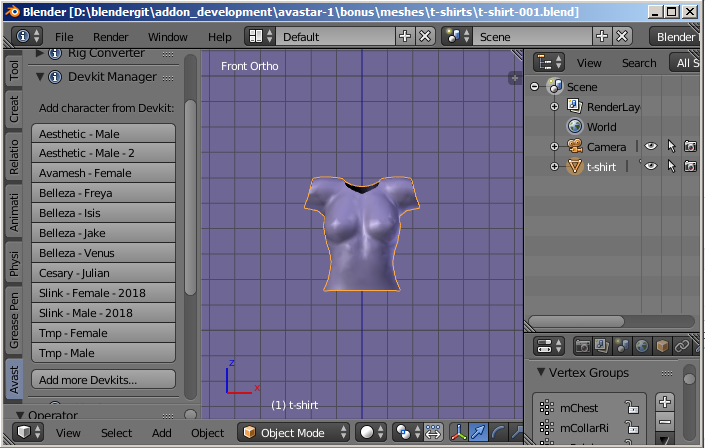 When the attachment creator clicks on the appropriate developer kit button… 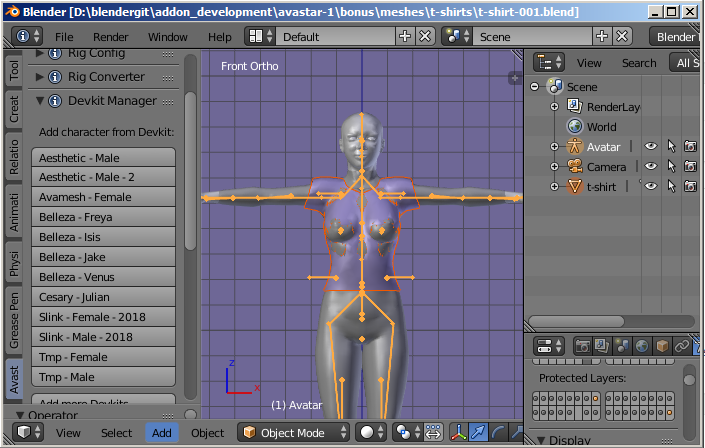 the Developer kit is added to the scene without removing anything

I will not get into detail here. The image just shows how it might look after doing the basic adjustments. 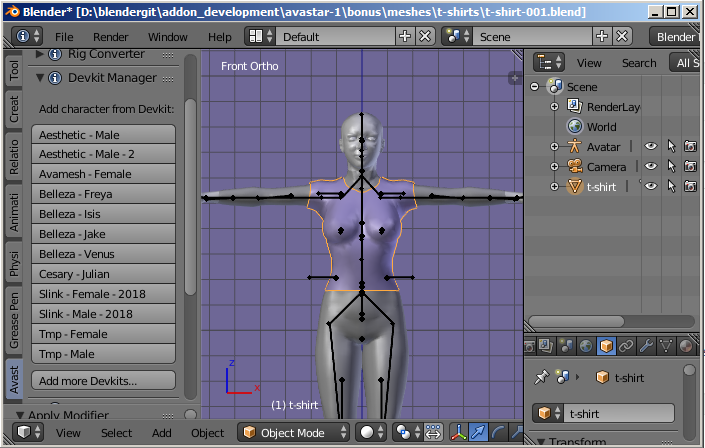 Once the model is adjusted and bound to the Armature, the attachment creator will proceed with checking the weighting and adjusting the weights where necessary to match the Developer kit as good as possible. 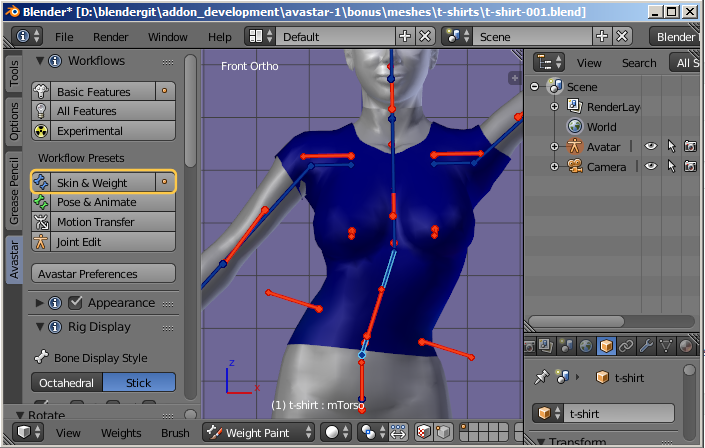 Once the weights have been set up and tested, the attachment creator might also want to go into posing and animation.

In this case the attachment creator will switch to the Pose&Animation workflow where he/she can use all animation features from Blender to create still poses or animations as they like. 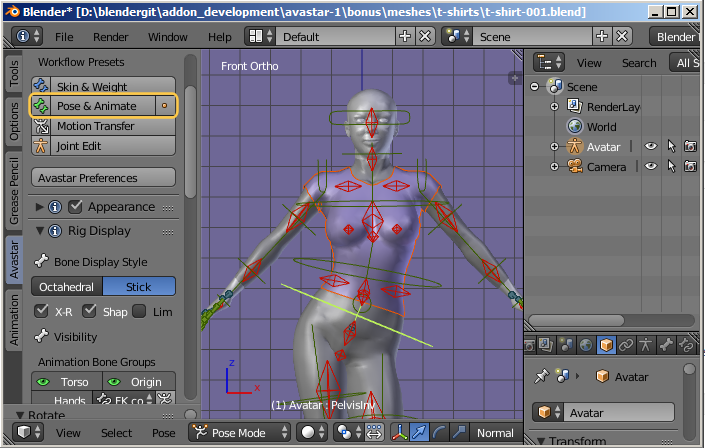 Avastar provides a decent panel for controlling which part of the Rig shall be displayed. The Rig Display panel is probably one of the most used panels we have.

Here the attachment creator can also change the display style from Shape to Octahedral or Stick. 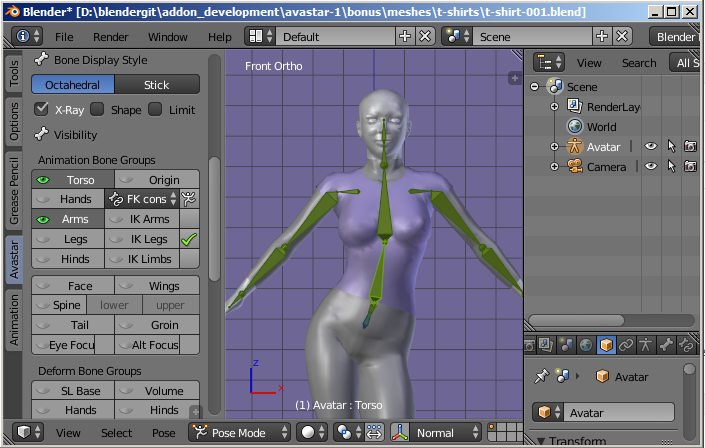 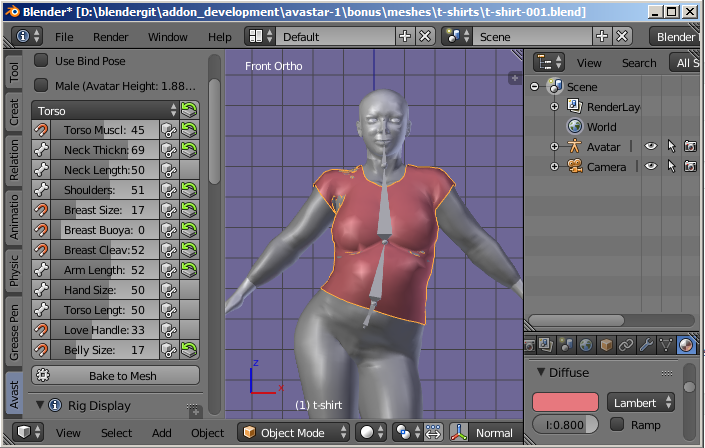 1 If you create an attachment that uses its own bones (Bones which are not already used by the Developer kit) then you probably also want to enable with joint offsets.

What you need to provide to your attachment makers

Please also read the remarks below. The Avastar documentation contains a very detailed document about how to create your own developer kit

(2): Can be “POS” or “PIVOT”, we recommend you always work with the PIVOT Rig

(4): If the developer kit restpose type is not the T-pose and if the restpose was created only by rotating the bones, then the rig is most probably good for using the bind pose option.

If  the developer kit is mostly non human and comes with a heavily edited rig with bones moved around (translation) to other places, then we recommend to not use the bind pose option to avoid issues in SL.