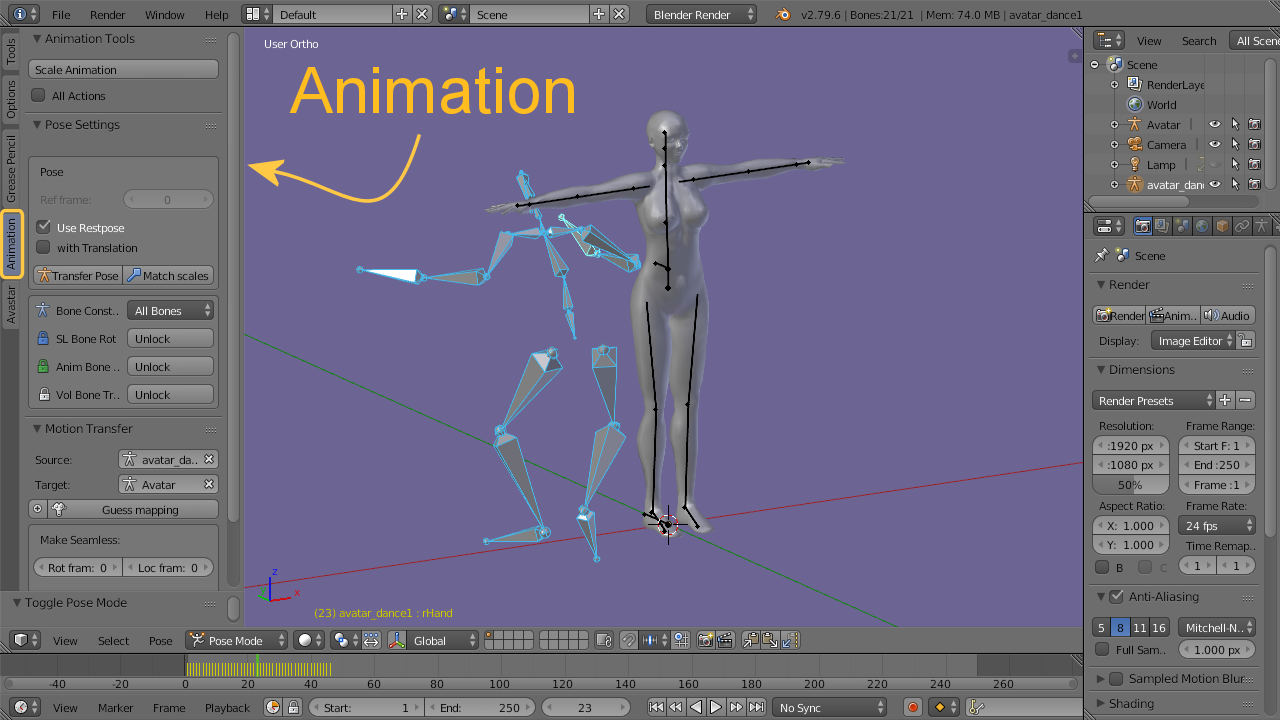 You find the entire import functionality in the Tool Shelf, Animation Tab, in the Pose Setting panel and the Motion Transfer panel.

Blender supports the import of BVH files out of the Box. You find the importer in the Top menu at: Note(1): If you import an animation that was made for Secondlife then its unit of measurement is Inches. In that case you can use the factor 0.0254 to rescale the figure to Blender units when you import the BVH file.

Note(2): You can set – but you do not strictly have to set – the Scale factor to match the imported Armature and the Avastar armature. However if you do not fix the scaling during import then you can easily end up in a situation like in the image above.

Even if the BVH Scaling matches roughly to the Avastar size, in most cases the match is not perfect. Because of this we have added the Match Scales function at the bottom of the Motion Transfer Panel (see image) The tool is displayed after you have imported the BVH file. We get back to this again in a moment. 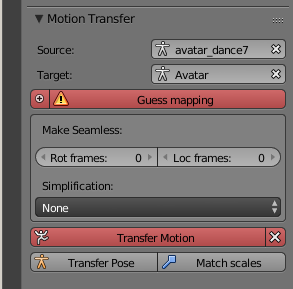 The Match Scales function rescales the imported Animation rig in Object space to match the Avastar rig’s Skeleton. However, we get the scaling value only from the Z-Axis and apply that value to the X- and Y- axes as well. In most cases the result is good enough to work with. But you always can manually adjust the armature scale in Object mode.

If you need to edit the rigs to get better results, then always(!) edit only the Avastar Rig. Do your editing before you do the motion transfer! Editing the imported rig will destroy your animation.

When you import a BVH file, then the used Bones can have arbitrary names. Also your animation Rig can have different bones than the target Rig. This issue can be solved by using a Bone Map.

By default the Bone map is collapsed and hidden inside the Guess mapping button. You can expand the Map by clicking on the small + Icon left to that button. A list of Bones shows up.

The left column (Target) is a read only list of Bones in the target Rig (Avastar in our case). While the right Column is a list of bone names which appear in the just imported Rig. Initially the Map is empty and you have to fill it manually. However, we have added a Map Guessing tool, which works nicely for Animations that already have been made for SL. You can just test the Guessing tool and see if your imported Animation rig is recognized. In the case above the guessing tool has identified the Animation Rig to be an SL/OpenSim compatible rig, thus all available Bones are automatically assigned and we do not need to bother with that.

The Bone picker lets you select one Source bones from the Animation rig and manually map it to a bone on the Target rig: The Range Mirror Copy lets you copy the limbs. Thus you only need to assign one half of the bones, then use this tool to automatic fill the symmetric bones on the other side.

The Clear Tool removes all associations in the Bone Map. In order to transfer the animation we not only need the Bone Map, but we also need one timeframe in which the Source animation and the target animation use the same pose (at least a closely matching pose). This Reference Frame will then be used as guideline for the transformation tool. If both Rigs use the same restpose then you can simply enable the Use Restpose option. Then the Ref Frame option is greyed out and you do not need to create a reference frame 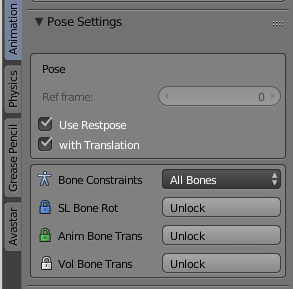 Note: The Reference Frame does not need to be part of the transferred set of timeframes. Actually in most cases the timeframe 0 is not used by the imported Animation. So it can be used to create a matching pose.

The following approach is only one possible way to go. This works nicely when both the target rig and the Avastar rig use the same rest pose (namely the T-Pose). The workflow is as follows:

Provided that the RefFrame contains the same Pose for the Animation Source Rig and the Avastar Target rig. In that case the Transfer Pose tool transfers the pose of the current timeframe from the Source rig to the currently selected Bones of Avastar Rig. You can select whichever timeframe you want to copy.
This is the timeframe as it looks after the Pose has been transferred:

Note: Timeframe 0 contains the Reference pose, while timeframe 1 has been transferred from the imported animation to the Avastar timeline. Timeframe 1 before pose has been transferred Timeframe 1 after pose has been transferred

The match scales function rescales the imported Animation rig such that it matches the Avastar rig. In detail the Rigs are compared in their Rest Pose. And actually it is the ratio of the Skeleton heights (Z) which determine the scale factor. Of course this approach only works when the Source Rig and the Avastar Rig have comparable topology. Before Match Scales has been applied After Match scales has been applied

This tool is used when you want to create a periodic Animation cycle. Lets assume your imported animation was not exactly created for looping. then this tool can be used to interpolate rotation changes and location changes such that the first frame and the last frame of the animation loop smoothly.

The numbers define the timeframe range over which the easing shall take place.

Simplify can be used to reduce the number of keyframes used in the imported Animation. We provide 3 options here:

Note: The Simplify feature makes only sense when your animation contains hundreds of keyframes. This mostly happens when you import motion captured animations. Handle this feature with care.

The most important function in this panel is the Transfer Motion function. This will transfer the motion stored in your imported animation timeline to the Avastar timeline. You have to ensure that all parameters as explained above are correctly set. otherwise your animation will become distorted.

The little white cross is a nice helper tool too. Lets say you have found your animation is broken in the Avastar timeline, then you can wipe it out by clicking on this erase button.